Premier had to work through the night to install project offices and welfare facilities for
a major regeneration project in central London.

The Premier team worked from dusk until dawn to install a site accommodation building and welfare facilities for Mace in central London.

The £600k contract is for the hiring of a four-storey facility, fitted out with two floors of project offices, changing rooms, showers and canteen, as well as a separate prayer room, security building and disabled toilet.

The modular building will be on hire from Premier for two years during the construction of Nova East site – a 166,000sqft, 17-storey prestige office scheme. Developer Landsec has been transforming this 5.5-acre island site as part of the £2.2bn regeneration of Victoria.

The site is highly constrained site – on a red route, adjacent to the listed Victoria Theatre, with London Underground directly below, and opposite London Victoria Train Station – one of the capital’s busiest transport interchanges. This location meant working hours for our modular building installation were restricted to between 7pm and 5am.

Following extensive co-ordination and careful logistics planning, the Premier team pulled out all the stops and installed the building a day ahead of schedule, working through four nights instead of five. 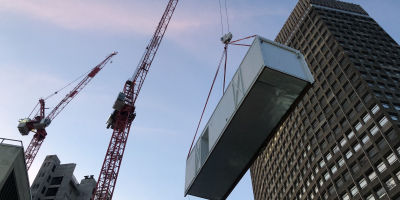