The Construction Enquirer launched the awards to recognise the best construction firms to work for and do business with.   The awards are open to contractors, clients and suppliers and are decided by an industry vote.

As the Construction Enquirer reveal their lists of Top Ten Winners, Premier Modular is delighted to have been included in the Top Ten for Best Specialist Contractor to Work For (Over £25m turnover).

More than 11,000 votes were cast in the voting for these awards and the fact that they have been voted for by construction people makes them that much more special.   These awards will be celebrated at an awards night in Birmingham on 18th October alongside UK Construction Week, when the company who came first in each category will also be revealed.

A huge thank you to everyone who voted for us. 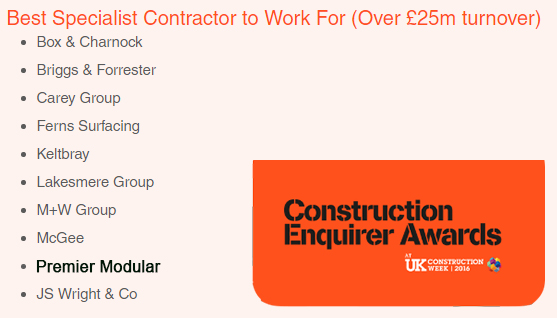