Looking Back at 60 Years of Premier Modular

January is a time for reflecting back on the past year, which for Premier Modular meant celebrating thier 60 Year Anniversary. Here, Ian Astley looks back at Premier from the beginning...

As it is the start of a new year, here at Premier Modular we are reflecting back on 2016. One of the main events of last was the celebration of the momentous anniversary of 60 years in business.

Ian Astley, who is not only a colleague but has a close connection to the company, looks back at the Premier from the very beginning.

“It’s funny when you are nearing a birthday it’s usually with some trepidation particularly a big birthday with a zero at the end.

Last September, as a company, we reach the ripe old age of 60. In these difficult times I think that is something to be extremely proud of. Having spent much of my working life with Premier I looked back at some of the highs and lows we’ve experienced as a business.

My Dad and his partner Tom started the business after a chance meeting - it turned out to be a very fortunate meeting. Formed in September of 1956 we started out life manufacturing in a small factory in Blackburn. In those days it was garages, garden sheds and horse loose boxes all made from timber. I spent many a summer day at the Lancashire show as a kid on a day out because they were showcasing their buildings.

Our first foray into modular buildings came when we were approached by Lancashire county council to produce classrooms for the growing population in the early swinging sixties. Followed shortly by a massive order for Liverpool docks where we produced 50 buildings for the thriving dockside. I remember my Dad getting a phone call to say that we had to change the floor coverings because we had laid red and blue tiles in Liverpool and Everton areas and neither set of supporters would set foot in the wrong coloured areas. They were all timber framed panels in those days.

We then stepped up to producing  what are called volumetric buildings in other words you built a classroom in a factory put on a wagon and took it to a  school. That will never take off people said!!!

We were sending out a double classroom every other day. They were all green and black with a finish that would take your face off if you brushed against it.

There have been many laughs along the way and just a few major traumas. I remember getting a phone call from the police early one morning a freak gust of wind had lifted a module off the wagon snapping the chains and spreading the module over one of the busiest motorway intersections. “Get here as fast as you can” said the rather irate police man. When we got there it was chaos but it left an imprint on my mind forever. They had a police constable sweeping the M6 and M61 with a yard brush to try and get traffic moving!!!

Or the time we were sending modules to the northeast past our house - it was the 13th module on Friday the 13th when the driver hit a railway bridge because he’d gone the wrong way and flattened the module. Another visit from our friendly constabulary ensued.

The business grew and grew until we came to the notice of a fast growing group and they bought us in 1978 at the time they were the fastest growing small company on the stock market. Unfortunately as fast as they grew they wilted and we were then acquired by our current owners in 1990.

We’ve gone through tough times too as we went into administration in the early 90’s having to close our factory in Blackburn and re-open at Brandesburton under the name of Premier Transline having bought Transline from the Administrator. Having been away from the business for 5 years it was a bit of a shock coming back to the business in its new format. We grew to become profitable again and shrunk and lost money again but in the background Waco international believed in us. They invested in buying Interlink and enabled us to grow again.

When you look back hell there have been some rough times but there have been some momentous times too, producing a fantastic range of buildings for all sectors including multi-storey buildings that are permanent - not bad for a product that wouldn’t work. Modular buildings are seen as an alternative to traditional build and I have been lucky enough to see the progression. As many a client has said “they look like real buildings”.

Would I change my time here? Probably not (although I would have preferred being a footballer) – I’ve met some great people and it’s good to see us on an upward curve. The boundaries of modular are being pushed further and further back as offsite construction gains credence. Quality is second to none, costs are fixed, and programmes reduced it’s a brave new world and I’m glad to be part of it. Here’s to the next 60!” 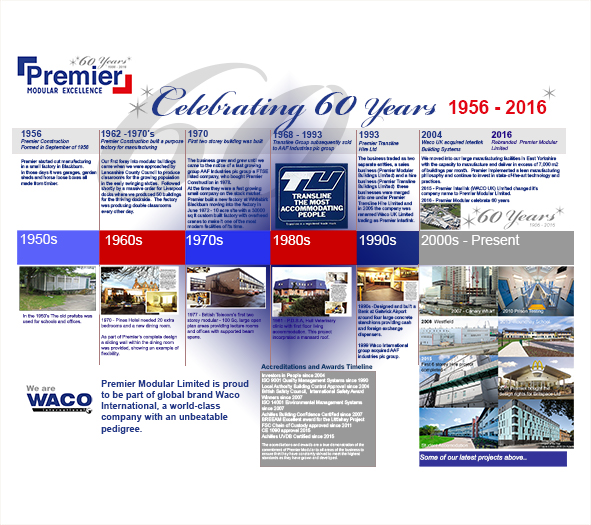